Home of RF and Wireless Vendors and Resources

One Stop For Your RF and Wireless Need

We all are aware of Local Area Network or LAN which is used to interconnect multiple workstations over small area. These LANs usually will have about 10 to 100 users but not more than 1000. It is widely used to connect several office departments in the same building or to connect different floors. Ethernet is the physical layer used in a LAN. More than about 85% of the LANs are using Ethernet standard due to its speed, lower cost and ease in the installation. Robert Metcalfe, engineer who was working with Xerox first invented Ethernet network in the year 1973 and was used to interconnect and send data between work station and printer. The system had detected collisions when two frames are simultaneously transmitted by work stations. The collisions were avoided later by the concept called CSMA/CD as mentioned below. This Ethernet tutorial covers standards, Ethernet frame formats (DIX, IEEE802.3), CSMA/CD protocol, Ethernet topologies, Ethernet test protocols and more.

Topology is the shape of the network i.e. configuration by which nodes and connecting lines are arranged. There are four basic topologies used by LAN. They are Bus, Ring, Star and Tree. Ethernet uses these topologies to provide the connectivity between nodes. The connecting medium between nodes can be large coaxial cable or small coaxial cable or twisted pair or fiber optic or wireless medium. Based on these different Ethernet versions exist.

This protocol makes effective use of the bus between transmitting and receiving nodes. CSMA/CD stands for Carrier Sense Multiple Access with Collision Detection. For example, one node-A wants to transmit the data to node-B connected on Ethernet medium. The software running on node-A sends the data to NIC to build the packet. The packet is stored in the RAM of NIC and node-A monitors the bus. If no carrier is present on the Ethernet network, node-A transmits the packet over the medium. The data is broadcasted to all the PCs connected on the Ethernet bus. All the receiving nodes compare destination Ethernet address and whoever nodes' Ethernet address matches it will accept the packet from the medium and rest of the others will discard the packet.

Whenever any one of the nodes transmits the information on the bus, all the PCs detect what is known as carrier. Carrier is nothing but the data transmitted over the bus at some rate as specified by Ethernet standard.

If collision is detected when two or more nodes try to transmit at the same time then nodes will wait for some random period of time and will transmit again. This protocol is referred as CSMA/CD.

Ethernet has two main layers as per OSI stack physical layer and data link layer. These layers are involved in forming the Ethernet frame which is used to package the data transported between nodes. These Ethernet frames are processed by NICs (Network Interface Cards) in both the transmitting and receiving devices. There are two frame formats DIX and 802.3. There is slight different between these frame fields as shown in the figures below. Hence device using DIX and one using IEEE802.3 need to adapt each other's frame formats in order to communicate over LAN.


As shown in the DIX frame consists of preamble, destination address, source address, type, data payload and FCS fields. Source and destination addresses signify originating and terminating NICs respectively. This Ethernet addresses are of 6 bytes each. Preamble is used for synchronization purpose in the receiving Ethernet card. FCS is used for error detection purpose and is of 4 bytes. Data payload part carries information and will be of size from about 46 to 1500 bytes. Type field signifies higher layer protocol used for transmission of the frame for example TCP/IP or UDP/IP.


As shown in the fig.2, IEEE 802.3 Ethernet frame consists of preamble, Start Frame Delimiter (SFD), destination and source addresses, length, data and FCS fields. SFD defines start of the frame and is usually contains 10101011 bit sequence. Length field signifies number of bytes in data field portion of the frame. If data field is less than 46 bytes, padding bytes of value zero is appended. The difference between both the type of frame is that DIX contains type field and 802.3 contains length field in the same position in the Ethernet frame.

In Ethernet digital data is directly transmitted over the cable and no modulation is applied. In Manchester encoding data is mapped as per non return to zero format which will have both positive and negative voltage in a single bit. Here Bit '1' is represented as positive pulse followed by negative pulse. Bit '0' is represented as negative pulse followed by positive pulse. As this signals are AC resulting into zero voltage on the Ethernet cable. The positive to negative and negative to positive transition at the center helps derive the clock signal from the information data itself. Hence synchronous process is performed without even transmitting the clock signal. Most of the Ethernet uses DC version of Manchester encoding. 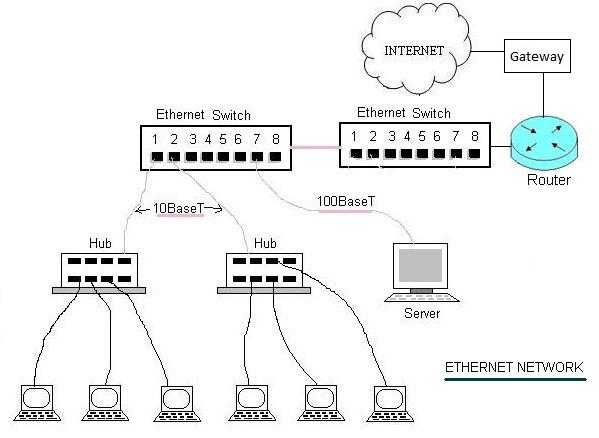 Following protocols are very useful for Ethernet testing. ARP and RARP are already incorporated in the framework of internet protocol family in all the Ethernet devices.

ARP: This ARP (Address Resolution Protocol) converts IP address (logical address) to the physical address (Ethernet address).
RARP: This RARP (Reverse Address Resolution Protocol) converts Ethernet address to the IP address.
Ping: This protocol helps test the path between source node to the destination node. This protocol sends some packets from source node to the destination node and back. If all the bytes are received without any packet loss then path between two nodes does not have any problem/issue. If this continuity test passes than user can send the information over the Ethernet network.

There are companies which provide Ethernet test solutions and services. The reputed among them include IXIACOM, EXFO, Agilent technologies, Spirent , Tektronix and more. They provide test solutions for 10Mbps (10BaseT), 100Mbps (100BaseTX), and 1Gbps (1000BaseT) and other Ethernet standards based solutions.

The Ethernet test solutions are manufactured by companies to cater for product testing based on various transmission mediums which include copper, twisted pair and fiber optic.

The major test parameters are throughput (maximum bandwidth at which Ethernet works), round trip latency, lost frames and back-to-back frames as defined in RFC2544. There should be zero lost frames ideally. Back to back frames test determine maximum buffering capacity of the Ethernet.

Networking is the term used for network of computers or internet enabled devices connected together to form data communication network. This network is used for transfer of data from one device to the other with the use of TCP/IP or UDP/IP packet.